When The Pokemon Company and Niantic introduced Pokemon GO in 2016, they broke new ground. Since then, the smartphone augmented reality game has gotten several upgrades in order to keep the majority of its enormous following engaged. Pokemon GO has revealed the Pokemon that will serve as the focus of the Community Day update that will take place in August 2022. This Pokemon is a Gen 3 variant of Zigzagoon. Can’t Wait to Catch This Galarian Zigzagoon Community Day August 2022 !

It has been revealed by Pokemon GO that the Community Day Pokemon for August 2022 will be Galarian Zigzagoon. This Pokemon is the Gen 8 rendition of the raccoon Pokemon from Generation 3. Galarian Zigzagoon was initially featured with other regional versions of Pokemon like as Corsola, Koffing, Meowth, Slowpoke, and Mr. Mime in the original release of Pokemon Sword and Shield. Galarian Zigzagoon features strong black and white stripes, which carry over to the evolution of this regional form, Linoone. In contrast to the many hues of brown that are represented in the Hoenn regional version of Zigzagoon, the Galarian variant of Zigzagoon has these stripes. On the Pokemon GO Community Day on August 13, Galarian Zigzagoon will occur far more often than usual between the hours of 11:00 AM and 2:00 PM local time, giving players the chance to capture the Galairan form of Zigzagoon that is exclusive to that area. The Galarian form of Zigzagoon develops into a Linoone at level 20, much like the one seen in Gen 3, however unlike the Hoenn variant, it then goes on to evolve into Obstagoon.

This is because the Hoenn variant stopped evolving at Linoone. It is guaranteed that the player’s Linoone will know the Charged Attack: Obstruct if it is evolved into an Obstagoon during this event or during the next five hours after it has ended. Players may evolve their Linoone at any time.

Stickers with a theme related to the event may be obtained via spinning PokéStops, opening Gifts, or buying them from the in-game store. 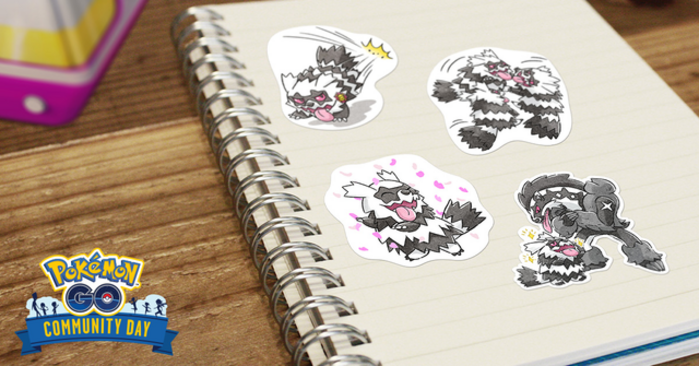 When playing Pokémon GO, it is important to be mindful of your surroundings and to follow any advice provided by the relevant local health authorities. The schedule of upcoming events is subject to modification.

In Pokémon GO, the Galarian variant of Zigzagoon will serve as the Community Day Pokémon for the month of August 2022. The Galarian Zigzagoon is a Tiny Raccoon Pokémon that is of the Dark and Normal type. On the Saturday, August 13, 2022, between the hours of 11 a.m. and 2 p.m. local time, players will have an increased chance of coming across Galarian Zigzagoon in the wild. In addition, there will be a greater possibility for players to come across a Shiny Galarian Zigzagoon, which differs from its regular counterpart in that it has white and red stripes rather than black and white.

If you give a Galarian Zigzagoon 25 sweets, it will develop into a Galarian Linoone, and if you give it another 100 candies, it will become a Galarian Obstagoon. Players will get an Obstagoon that is familiar with the Charged move Obstruct if they develop a Galarian Linoone during the event or up to five hours after the event has concluded. During Trainer Battles, players may boost their Pokémon’s defense with the Obstruct move, which also lowers the defense of their opponent’s Pokémon.

In a Gym Battle or a Raid, the damage done by Obstruct will be increased. It will be much simpler for players to develop their Linoone into an Obstagoon and win the bonus during the Galarian Zigzagoon day event in Pokémon GO since they will get twice as much candy for capturing the featured Pokémon.

During the Community Day in August 2022, users may pay an extra dollar to participate in Special Research for Galarian Zigzagoon. This research will earn them more goodies based on their progression during the event. Bonuses for events are a part of every Pokemon GO Community Day, and the one that will take place on August 2022 will include more Stardust and Candy for catching, incense and lures that last longer, enhanced exchanges, and other features. Players of Pokemon GO who cooperate with one another to defeat four-star Galarian Linoone Raid Battles during August’s Community Day will be eligible for even greater additional awards at the conclusion of the event.

Others are disappointed that the update does not feature more fundamental changes, despite the fact that many Pokemon GO players are rejoicing over the fact that August 2022’s Community Day is centered on Galarian Zigzagoon. Many Pokemon GO players have begged Niantic to either extend the duration of the Community Day or alter the time constraints that apply to their area as a result of time-related concerns that arose during some of the game’s earlier events. Fans who are also impacted by the heat waves that are occurring in several areas across the globe have hypothesized that the Galarian Zigzagoon Community Day may end up being one of the hottest on record.

Galarian Zigzagoon will appear more frequently in the wild. If you’re lucky, you might encounter a Shiny one!

In Pokémon GO, the following is the information on the Galarian Zigzagoon Community Day: In addition, players will have the opportunity to get stickers related to the event via opening Gifts, spinning the Photo Disc at PokeStops, and buying them from the in-game shop.

Aside from that, players will have the opportunity to pay one dollar for a ticket that will get them access to a Special Research plotline on Community Day titled “Field Notes: Galarian Zigzagoon.” This option will be available in other areas of the game as well. Players will have the ability to buy this ticket not only for themselves but also for their in-game friends. Players will be able to buy one of these tickets for themselves, and they will also be able to buy it for their friends.

Finally, players will be able to do battle against Galarian Linoone in Tier-4 Raids on August 13, 2022 from two in the afternoon until seven in the evening, local time. After a player has defeated Galarian Linoone in one of these Raids, Galarian Zigzagoon will spend the next half an hour roaming the area surrounding the Gym where the Raid was held. The Galarian Zigzagoon that arrive between the hours of 11 a.m. and 2 p.m. local time on August 13 will have the same chance of becoming Shiny as the Galarian Zigzagoon that will occur between these same hours during this event.

Pokémon Go is Down? They Not Working? Here’s how to fix it and See If The Server is available or not.