The Community Day event in Pokemon GO is a time-honored tradition in the game, in which Niantic emphasizes a certain Pokemon, enhances the probability of catching shinies, and gives evolutions of the highlighted Pokemon a unique, often meta-defining move. Pokemon GO Community Days in the past have included starters, pseudo legendaries, and other fan favorites.

Niantic, the creators of Pokemon GO, has revealed the featured Pokemon for the Community Day event, as well as the benefits available during and after the event.

Starly Is The Next Protagonist On This July Community Day 2022 !

The next Pokemon GO Community Day has been set for Sunday, July 17, from 11 a.m. to 2 p.m. local time. Starly is the featured Pokemon for the new community day.

Starly is a Normal and Flying-type Pokemon from the Pokemon universe’s fourth generation. Starly can be evolved into Staravia with 25 Starly Candy and eventually into Staraptor with 100 Starly Candy in Pokemon Go.

Staraptor will learn the move Gust every time a player evolves Staravia into Staraptor during this event and the five hours immediately after it.

Several in-game benefits will be available during the Pokemon Go Community Day event in July:

Niantic, the Pokemon Go creator, announced another incentive that would be accessible during the July 2022 Community Day event on the Pokemon Go website:

During this Community Day event, players will be able to earn Starly-themed stickers by opening Gifts, spinning the Photo Discs at PokeStops, and buying them in-game.

Players may also pay $1 on a ticket that grants them access to the “Field Notes: Starly” Special Research plotline on Community Day. Players may buy these tickets for themselves as well as for in-game buddies.

Finally, on July 17, 2022, from 2 p.m. to 7 p.m. local time, gamers will be able to engage Staravia in Tier-4 Raid combat. If a player defeats Staravia in one of these Raids, Starly will arrive near the Gym where the Raid was conducted for 30 minutes.

Read More: Revives In Pokemon GO How It Works ?

Additionally, groups of Pokemon GO players that capture Pokemon using a single Lure module will get 4x additional XP for thirty minutes. The event’s time span will ultimately come to a conclusion, but there will be one more bonus before the day is done. Staravia will emerge in four-star Pokemon GO raids (but not through remote raid passes), and defeating it will raise the spawn rate of Starly in a 300-meter radius for 30 minutes.

Aside from the impending Community Day, Pokemon GO has revealed that more of Sun and Moon’s Ultra Beasts will be added to the next GO Fest activities. Three more will be added, one for each of the three real-world incidents. Ultra Beast Pheromosa will appear in the July 1 event in Berlin, Buzzwole at the July 22 event in Seattle, and Xurkitree at the August 5 event in Sapporo. 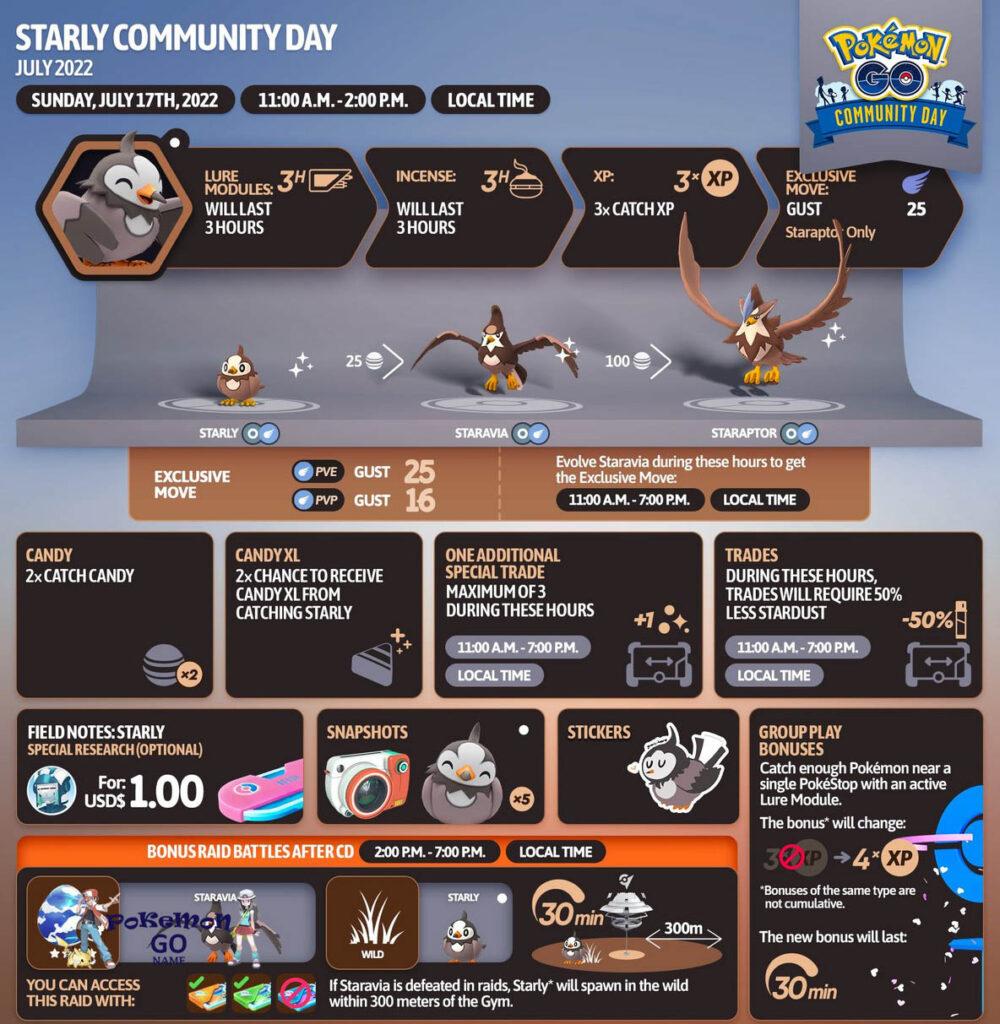 We’re less than two weeks away from the June Community Day, yet the featured Pokemon has yet to be unveiled. Various speculations suggest that Starly will be the June Community Day Pokemon. This would be fantastic since Starly’s shining form has yet to be published in the game, implying that we may receive a new shiny form. We already know that Starly is a popular Pokemon, but it would be fantastic to see a new shiny form and a new attack Fly.

It will be intriguing to see what more Pokemon GO adds in the next weeks and months, but the smartphone game already benefits from the franchise’s fame. Pokemon Scarlet and Violet will be released in November, and it stands to reason that their success will increase the popularity of Pokemon GO. Regardless, it will be beneficial to the whole brand.

There Are Also This Cute Stickers in this Community Day As You Can See: Pokemon GO is now available for download on mobile devices. The Great League be introducted in December of 2018, Pokémon GO PvP has grown in popularity. Since then, the Silph Arena has been the driving force behind the creation of new and interesting themed rated tournaments and events. One of the most important things to consider if you want to get into the Pokemon GO… Defeating Pokemon Go’s Team Rocket Leader Arlo can be problematic, so we have the best counters for his inadequacies that will lead you straightforwardly to win. From Exeggcute to Dragonite, Steelix, and Scizor, this is the method for beating his plan in April 2022. Here are This Pokémon GO Arlo Counters Guide 2022 One of…